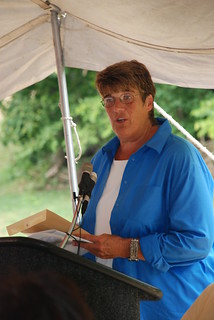 They say the first blog is always the toughest.
This one’s about my friend Sally Hutton.
For fear of repeating everything that has so eloquently been written by Palladium-Item reporter Rachel Shelley and dozens of others about Richmond’s former mayor, I will celebrate her with my recollections of her time in office.
We had a funny, warm, weird, sarcastic relationship, much like Madam Mayor’s effervescent personality.
Within a month of her taking office, she became embroiled in the contentious battle over the rezoning of 33 acres of Hayes Arboretum land for commercial development.
I’ll bet most people have forgotten that fight, especially those searching for sales at Kohl’s, trying on yoga pants at Dick’s, munching burritos at Chipotle or sipping lattes at Starbucks.
But there was Sally in the eye of the storm. Republicans and Democrats screaming at each other. Business leaders screaming at tree huggers, neighbors screaming at council members and the mayor.
And people screaming just because they were unhappy.
If you remember, council approved the rezoning, Sally vetoed the vote and the Hayes folks filed an $8.25 million lawsuit against the city and the mayor.
Council failed to override the veto but Sally relented and the zoning went through.
Through it all, Sally stood tall, but her path forward was set.

We had a warm relationship, at the beginning. We were always friends because that’s the way Sally was.
I’m guesstimating that I called her more than 2,000 times in her 12 years in office. I called her in the office, at home, while she was driving, picking up the grandkids, cleaning alleys, out to dinner, just about everywhere she went.
At first, she answered with “Well, how are you?” with a heavy emphasis on the “you.”
In the proceeding years, she would answer with “What do you want?” or “I just talked to you!”
Still I knew she had not lost her sense of humor and the sarcasm was good natured.
Once, we were talking family and I told her my oldest sister was a department head in one of the biggest law firms in Chicago, and my other sister worked in the University of California library system and played a key role in digitizing the university’s entire library system.
Without missing a beat, Sally said “Well, what happened to you?”
I grew to know Sally during her years on Common Council and grew to love and respect her during her terms as mayor.
She was always the voice of the underdog, speaking up for the people who had little say in their governance. She was the champion of neighborhood associations, loved kids, visited the elderly and infirmed and was fiercely protective of those who worked for her, especially her department heads.
And she was great company, confirmed during hours of discussions when I featured her in 2005 in my Fifty Weeks of Success series and again in 2010 when I spent a day as mayor.

But she was not a great interview because her philosophy of government was too simple.
“You have to bring people together. Everyone has to have a voice. They have to have seat at that table. That’s how you get things done, by working together.”
I think she really believed that.
Still, she stayed too long in the mayor’s office. Even she would admit that. The final years were a grind. Some time around year nine or 10, things soured. The economy went south, businesses closed or left town, wages stagnated and drugs and crime began to spread like weeds around an abandoned house.
Critics blamed her for trash, lost jobs, pot holes, abandoned houses, weeds, drugs, the old Reid Hospital mess, low student test scores, stray cats, the inability to attract “high-paying jobs” (I heard it a million times) and traffic lights not in sync.
But she never backed down, never shirked her responsibility, nor swayed from her belief that Richmond is grand and wonderful place full of nice people.
Even the knuckleheads.
We spent a lot of time together in those 12 years and what I found was a wonderfully kind and caring person.
I got my first glimpse of her humor on election night, Nov. 4, 2003, when she walked into the Kuhlman Center and was ushered up to the stand where the final election results were posted. She leaned in and stared at the results, nodding and smiling, while her supporters cheered.
Later, she told me, “I didn’t have my glasses on. I honestly couldn’t see a thing. But I knew something good had happened.”
Of the almost 8,000 votes cast, Sally had won by 141 votes.
“I’m amazed. I can’t believe it’s true,” she said over and over again.

She had a way with people that few others have. People loved her. That was Sally.
When I did my day-as-mayor feature, we sat through a dozen meetings, talked to politicos and Average Joes. We also rode in the RHS homecoming parade, me up top in the convertible, her beside me in the passenger seat.
People were puzzled. Nobody knew me but everybody knew Sally, from the youngest kids to the oldest grandmas.
And Sally loved it. “He’s the mayor and from now on you can direct all your complaints to him. He’s dying to hear from you,” she shouted a dozen times during the parade.
What bothered her most was the pettiness and divisiveness that drove some in governance and every day life.
“If we had some money this would be a whole lot easier,” she told me for a piece I wrote in 2008.
“The thing I want people to know is we can’t do this by ourselves,” she said. “I can’t do this by myself. Citizens of this community have to be involved. That’s the only way it will work.”
Today, Richmond is a quieter, sadder place.
My last memory of her is Veterans Day 2015 when she managed to make an appearance in Veterans Park. She couldn’t last through the entire ceremony and retreated to a waiting vehicle.
I went to say hello and was interrupted by veteran after veteran who came up to the car to say “Take care, Sally,” “Be well, Sally,” “God bless you, Sally.”
When I got near her I saw tears in her eyes.
And felt the tears in mine.

3 thoughts on “My time with Sally”