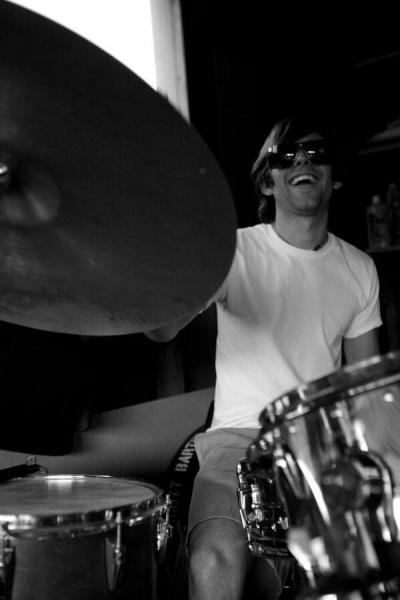 Scott Bartel is a preservationist.

His passion is restoring the architecture of a community built during the burgeoning prosperity of a bygone era.

But his heart burns for jazz and its message from the past.

“Musically, I feel like I have been entrusted with a tradition,” Bartel said. “There is a message and I have to carry that message forward.”

The 30-year-old Richmond man is owner and operator of an architectural restoration firm in Richmond. His passion is restoring, rebuilding actually, historic homes, including his own at the corner of 22nd and East Main Street in Richmond.

But then there’s the jazz. Bartel can be heard some days pounding out a subtle but determined jazz beat in his home, a stone’s throw from Test Middle School..

Bartel is bringing his jazz combo, Bruderschaft (German for Brotherhood), to Glen Miller Park for the City Life celebration Saturday. The 7 p.m. show is free and open to the public.

His music is a modern day version of the sound that was born and bred in Richmond when Gennett Records offered a tiny recording studio in the city’s center. In the late 1920s and ‘30s, that studio attracted some of the early pioneers of recorded jazz.

It became a Richmond tradition.

As City Life organizers hope to offer the community a taste of the city’s arts, Bartel hopes to remind residents musically that the city has a past built, to an extent, on music.

“This is a chance for people to experience the music and see that there is a message,” Bartel said. “It is the message of jazz, the message of the American tradition.”

Bartel started drumming in fifth grade, inspired buy the work of bands like Depeche Mode and The Police.

He found jazz when his grandmother, Betty Bartel-White, played Jeff Hamilton’s “It’s Hamilton Time” for him.

Hamilton is also a Richmond native and an accomplished jazz drummer who has played on over 200 recordings with artists such as Ella Fitzgerald, Natalie Cole, Diana Krall and Barbara Streisand.

Bartel’s favorite track was “Blues For You.”

“I listened to that track every night before I went to bed,” he said. “It just hit me. I knew that was what I wanted to do.”

He saw Hamilton at Civic Hall in Richmond and introduced himself. The two struck up a friendship that led to Bartel’s spending a week in Los Angeles with Hamilton, practicing for hours each day under his tutelage.

“He was super kind to me,” Bartel said. “But he was hard on me, on my playing. He tore me up. But I learned so much. Jeff was like a god to me.”

Bartel tried the Indiana University School of Music but left after a semester on the advice of David Baker, the IU prof, and renowned jazz musician, composer, historian and author.

“It just wasn’t for me. David Baker was the one who told me to just go play music,” Bartel said.

He studied for six months with jazz drummer John Von Ohlen in Cincinnati. Von Ohlen played for Woody Herman and Stan Kenton before forming his own Blue Wisp Big Band in Cincinnati.

He spent two winters in New York, gigging five nights a week in clubs for a hand full of dollars and “waking up every morning unemployed.”

So he decided to come back “to chill” in Indiana.

He bought the two-story home at 22nd and East Main. The Italianate structure, owned by Viola and Isham Sedgwick, was built in 1872. Isham Sedgwick was an inventor who owned a wire fencing plant in the city.

The home was once a mansion but had been forgotten and reduced to apartments in the 1950s.  Additions and stairways were added. At one time, a beauty parlor was operated out of the back of the building.

Bartel started work rebuilding the home. Soon people noticed his work and began asking him to do work for them. From that came his restoration business.

“It was like being a musician. People would see my work and ask me to do things for them,” he said. “The business has grown by itself.”

The transformation on his own home started three years ago and he admits that the project could take him 30 years.

“The most honest thing this house could be is returned to its original form,” he said. “This has been an educational opportunity for me and for the community. What better way to learn and to give back to the community than to restore an old home like this.”

He loves to talk about what he’s done and what he still has to do. Stop by and he’ll take you through the construction project even if it means scrambling up a ladder to get to the second floor.

He’s torn off additions, torn out staircases, reconnected floors and rebuilt moulding and cabinetry. He hauled 10 steam radiators up to the second floor. He is in the process of rebuilding a barn out back.

That’s what Saturday is all about.

“We’re trying to preserve the language of jazz, but to move it forward, to make it speak to today,” he said. “We want to introduce people to jazz and remind them that it has a message that continues.”

One thought on “Preserving a tradition”